A few of my fellow twits had pointed out that the Jays will play the Red Sox on September 5th, the 100th anniversary of Babe Ruth's first pro (and only minor league)  home run at Toronto's Hanlan Point Stadium.
Many of them suggested that the two teams play in the retro uniforms of the Providence Grays and the Toronto Maple Leafs, the two participants in that pre-World War I game.
And while the game is in Boston, and not Toronto, we still think it's a great idea.
The Sox had purchased the 19 year old Ruth from the Baltimore Orioles, who were a minor league powerhouse at that time, early in the 1914 season.  Ruth made his major league debut as a pitcher for the Sox on July 11th, and won four of the five games he started.  Because the Red Sox had a loaded roster, they loaned Ruth to Providence (this was in the era before major league teams had minor league affiliates and farm systems; minor league teams competed and operated as independent entities) so that he could pitch on a regular basis.
Ruth joined the Red Sox for good in 1915, and won 65 games in 3 years before Boston moved him off the mound and into the outfield to take advantage of his lethal bat.
The International League season was winding down when Ruth launched his home run over the right field wall and into Lake Ontario.  The Maple Leafs, who represented Toronto in the International League for almost three quarters of a century, had their home park at the time on the Toronto Islands, about where Porter Airlines flights take off today.
We've done a little research on the uniforms the two teams may have worn that day.

Here's a look at the Providence roster, with a young Ruth in the middle of the back row:

Finding a team photo for the Maple Leafs of that year proved a little difficult, but we came up with a few from that era, like the 1917 club: 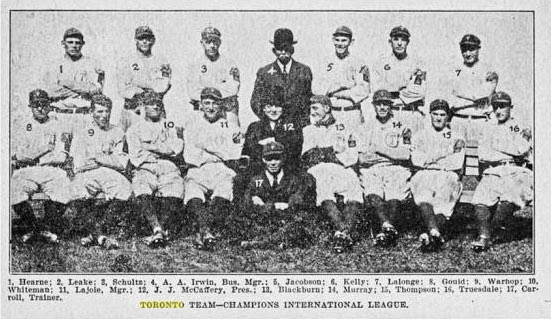 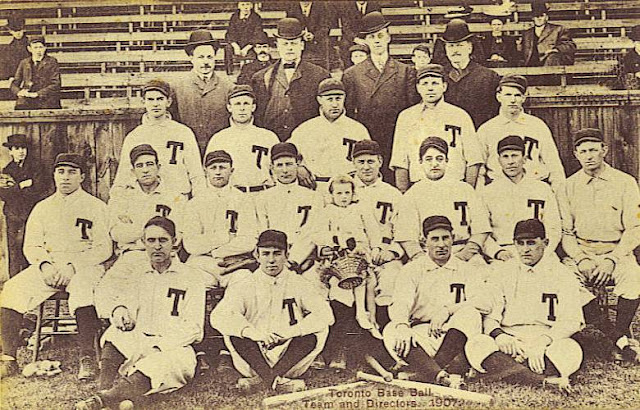 The 07 team is still wearing uniforms that had been in vogue since the late 1800s, with the high, button-up collars.  The hat was plain, with no logo on it.  The 17 team has a more modern look, with what appears to be a white T on the hat.  We're not sure when the club switched looks, but judging from the Providence photo, the 1914 Toronto club probably was wearing something similar to the 1917 uniforms.

We think this is a great idea, even if the game is taking place a couple of hundred kilometres, instead of a couple of hundred metres, from where the event took place.  Of course, given that the Red Sox practically donated Ruth to the Yankees, launching them on a period of dominance that lasted over 40 years, while the Sox went 87 years between World Series wins might mean that Boston might not be all that interested in such a night.  We'd love to see it happen, just the same.

Posted by Clutchlings at 8:18 PM

What would have been more appropriate is for the Baltimore Orioles and Toronto Blue Jays to have worn 1914 replica uniforms in June commemorating when Babe Ruth played for the International League Orioles 100 years ago and facing the Toronto Maple Leafs also of the International League. Ruth won 2 complete game victories over Toronto, pitches 5 innings in a relief performance in an Oriole win over Toronto and lost a 10 inning 2-1 game in Toronto. Alas, Ruth was only with the Orioles until July 10, 1914 - so we missed our chance for such a game.