One of the great things about being a blogger is that once you've established yourself (the extent of which can be debated), folks send tidbits your way that are not always available to the general public, like this kernel that came in during a thrilling Double OT Toronto Maple Leafs win: 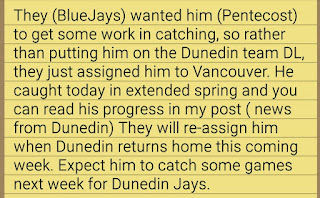 H/t to @JaysBoard, who runs a Blue Jays forum (bluejaysmessageboard.com), and a member who submitted the above who goes by the name of Spats.

Pentecost was the second of two first round selections (11th overall) in 2014, a year in which he was honoured with the Johnny Bench Award as the nation's Top College Catcher.
Pentecost last saw action behind the plate with Vancouver on July 15, 2014.  He suited up for all of 19 games with the C's before being shut down with what was thought to be fatigue from a long college season, and a possible knee injury.  It turns out that there was significant damage to Pentecost's throwing shoulder, and three subsequent surgeries cost him all of 2015, and limited him to DH duties when he returned to action with Lansing in May of last year.
Last fall, Blue Jays Player Development Director Gil Kim said the plan was to have Pentecost behind the plate in time for spring training.  Kim was not available for comment this weekend (I'll keep trying), but it would appear that that timetable was pushed back a bit.
Sending Pentecost to Extended Spring Training (which began yesterday) makes a great deal of sense. With the team's medical facility at the minor league complex, close tabs could be kept on him while he tests his shoulder in game action.  Today is an off-day for the D-Jays, who have a 7-game homestand coming up beginning on Monday.
A healthy Pentecost would give the Blue Jays a wealth of depth at the receiving position.  Reese McGuire is working with future Blue Jays teammates Conner Greene, Tim Mayza, and Sean Reid-Foley at New Hampshire, while the oft-injured Danny Jansen, who has been lauded for his skills and leadership, has started the season behind the plate for Dunedin, and has gotten off to a hot (.835 OPS) start.  Having Jansen in the lineup would allow the Blue Jays to ease Pentecost into action behind the plate, allowing him to alternate between Catcher and Designated Hitter until he was fully ready to resume full-time duties.