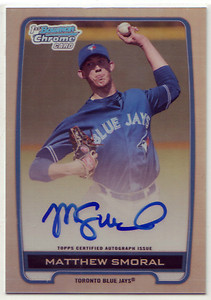 It may have not been the greatest week for the parent club's starting rotation, but Blue Jay minor league starters had a great week.
On Monday, Aaron Sanchez continued to make up for the month he was shut down with shoulder tightness, going 5 innings, and allowing 5 hits, while walking and striking out a pair.  Florida State League hitters have a .189 average against Sanchez on the year.  As we posted earlier, former Lansing teammates Noah Syndergaard and Justin Nicolino have been promoted to Double A, and may be a little bit ahead on the development curve, but Sanchez is closing quickly.  He touched 100 on the radar gun in his last start, and sat at about 96 with his fastball for most of his outing.
On Tuesday, Vancouver starter Jeremy Gabryswzski had another dominant outing, giving up just 1 hit and 0 runs in 6 innings.  Gabryswzski only struck a pair, but pitched well to contact.  He leads the Northwest League with a 0.99 ERA.
Earlier that evening, on the other side of the continent, BC-born starter Tom Robson of Bluefield gave up 4 hits and a walk, along with no runs and six strikeouts.  Robson's 1.38 ERA would have him among the Appalachian League leaders, but he's a couple of innings short of qualifying.
Marcus Stroman of AA New Hampshire topped off the week of strong minor league pitching for the Blue Jays with 6.2 inning outing on Wednesday.  Stroman struck out 11, while surrendering 5 hits and a pair of walks, allowing just one earned run.
Thunder Bay, Ont's Eric Brown had another strong start for Vancouver on Thursday, but was the victim of a lack of support.  This has been a bit of a recurring theme for almost all Jays affiliates.  New Hampshire was no-hit on Thursday, as were the GCL Jays in the first game of their Friday doubleheader.  Brown threw 6 innings, giving up 2 runs (1 earned) and 5 hits, walking 2 and striking out 4.  Brown lowered his ERA to 1.37 (in 53 innings) on the season.
And the GCL Jays Matthew Smoral had a pair of strong outings for the week, including his first pro start on Friday.  Over the two appearances, Smoral pitched 4 innings, allowing 1 run.  Still struggling a bit with his command but showing improvement with every outing , Smoral walked 3 and K'd 3.
A pair of Bluefield pitchers put together impressive outings in relief, as well.  Adonys Cardona began to show some of his huge upside with a 4 inning stint, giving up just 3 hits and a walk, with 4 K's.  Jairo Labourt lowered his ERA to 1.54 with 4 innings of 1-hit relief work, striking out 6.
Almost all of this pitching strength, of course, was below AA, meaning that help is on the way - it's just going to take some time.

Posted by Clutchlings at 6:02 PM