7 Jays' Farmhands Off to Arizona

The Arizona Fall League announced its rosters yesterday.  A total of 7 Jays prospects will be travelling to the Southwest at the end of September to suit up for the Salt River Rafters.
The AFL calls itself  "grad school" for MLB prospects.  In truth, it serves as both a challenge to prospects who haven't made the majors yet, and an opportunity for their MLB clubs to see exactly what they have in their players, and how they stack up against tough competition. Most of the players who attend played at AA or AAA that season. Teams hold a draft in August to determine how many players can be placed on an AFL roster.  Play begins in early October, and ends in mid-November.
In the past, clubs would send these top prospects off to various Caribbean winter leagues for further seasoning.  It became increasingly difficult to monitor the progress of their players however, and MLB decided to start the AFL in 1992.  Clubs play in the spring training sites used by the Giants, Mariners, Padres, Cubs, A's, Royals, Rangers, Diamondbacks, and Rockies, meaning that the players are housed in top-notch facilities.  Most of the sites are within a short distance of each other in the Phoenix area.
This year, the Jays will be sending pitchers Aaron Sanchez, Marcus Stroman, Sean Nolin, and Tyler Ybarra, along with catcher A.J. Jimenez, infielder Andy Burns, and outfielder Kenny Wilson.  Here's a brief snapshot of the rationale for sending each: 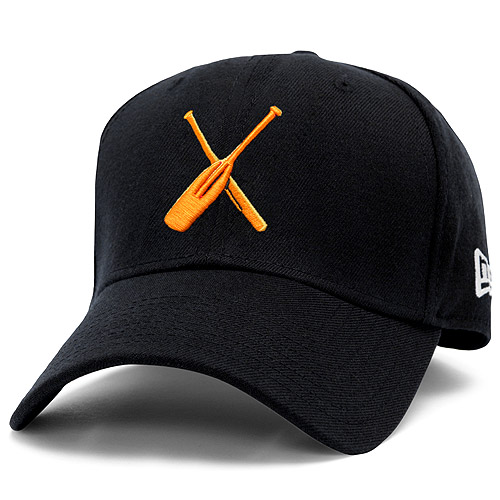 Aaron Sanchez
It hasn't been bad, but things haven't gone for the righthander, the Jays' 1st pick in 2010, the way he or the club would've liked this season in High A.  Former fellow prospects Noah Syndergaard and Justin Nicolino were promoted to AA and seem to have passed Sanchez, who had to struggle through a combination of missed time due to shoulder tightness, a blister issue, and multiple rainouts over the course of the Florida State League season.  Still, he was able to post a 3-5, 3.63 ERA in 79 innings, striking out 71, and allowing opposing batters to hit only .202 against him.  Playing in the AFL will both give Sanchez a chance to work a few more innings this season, as well as play against top-notch competition.

Marcus Stroman
The calls have been many for the promotion of Stroman from AA, where he has had a mostly dominant season.  Stroman's season didn't get underway until late May as he sat out the remainder of his PED suspension from 2012.
There has been quite a bit of debate about Stroman's merits, and his eventual role on a big league staff.  Some point to his lack of a downward plane on his pitches and the number of home runs he's given up that his future lies more as a late-inning power arm out of the bullpen.  Others point out that his 118  K's in 103 innings as evidence that he can get big league hitters out in a starting role. On the season for AA New Hampshire, he is 8-5, with a 3.47 ERA.
That Stroman didn't get a late-August call up may be more due to concerns about his innings, and to keep him off the 40-man roster in case they need to use options on him.  The fact that he was hit fairly hard in 2 of his last 4 outings might be evidence of a tired arm.  If  such was the case, the Jays are more than justified in shutting him down for a month, then sending him to the AFL for a challenge. Regardless, Stroman has missed a lot of bats this year, and seeing him with the Jays is just a matter of time.
Sean Nolin
Nolin was summoned for a start in the bigs by the end of May - and was shelled, lasting just an inning and a third.
Nolin has pretty much demonstrated that he had nothing left to prove at AA, where he posted an 8-3, 3.01 ERA, 1.23 WHIP record, and was promoted to AAA Buffalo late in August to help with their push for a playoff birth.
With the major league starting rotation a toss up behind R.A. Dickey and Mark Buehrle, competition for a starting spot will be wide open.  The Jays want to see what they have with Nolin, and sending him to the AFL is probably a smart way to do it.

Tyler Ybarra
Ybarra is a bit of a surprise, but he's a lefthanded power arm that the Jays are very high on.
Since missing all of 2010 due to some family issues, Ybarra has been dominant in 3 stops since then on the development ladder.  This year at High A Dunedin, Ybarra is 2-3 with a 1.86 ERA.  FSL hitters are hitting just .148 against him - he's given up only 27 hits in 53 innings, while striking out 63.  Clearly, High A hitters are having trouble squaring Ybarra up.  At 23, he's almost too old for this level, and could likely use the challenge of the AFL..

A.J. Jimenez
With the offensive and defensive struggles of J.P. Arencibia with the big club this season, there have been calls for Jimenez' promotion as well.
Jimenez' season didn't start until May, as he was recovering from Tommy John surgery.  The Jays started him off in Dunedin, then promoted him in June to AA, and was recently promoted again to AAA Buffalo.
Jimenez cooled off with the bat after a hot start, but still put up respectable numbers (.287/.332/.406).  His defense, throwing arm, and game-calling skills are not in question, but his bat definitely is.  Keith Law projects him as no more than a big league backup.
The AFL will give the Jays an opportunity to see how Jimenez fares against the tougher pitching.

Andy Burns
Outside of Kevin Pillar (who benefited greatly from his AFL experience last year), few position players made as much progress as Burns did this season.
After a relatively pedestrian season with the bat at Low A Lansing a year ago, Burns burst out of the gate with Dunedin this year, and was hitting .327/.383.524 before a promotion to AA in June.  With New Hampshire, Burns struggled with the stronger pitching at first, but has bumped his line up to .244/.300/.473 (.274/.324/.475 in August).
Burns played 55 games at shortstop with Lansing last year, but has spent the majority of his time at third base in his two stops last year.  He has drawn raves for his defence.
Burns transferred from Kentucky to Arizona his senior year, and had to sit out as a result.  One can't help but wonder if that missed year stalled his development somewhat, and might explain his struggles at Lansing.
The Jays are looking to accelerate that progress by sending him to the AFL.  He may struggle at first.
I asked Keith Law for his opinion about Burns earlier in the season: 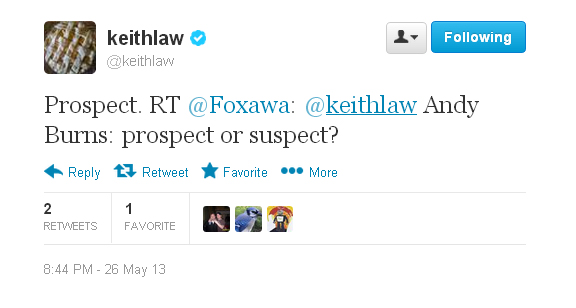 Kenny Wilson
Through the first four years of his pro career, the Jays' second round pick in 2008 hadn't progressed past A ball, and hadn't hit above .211.
Wilson turned things around in 2012, however, and appeared to have made huge strides with his bat.  Wilson's speed has been his biggest asset - 177 stolen bases in 5 minor league seasons prior to this one.  Wilson spent the off-season playing in Australia, where he continued to hit, and picked up where he left off in spring training this year, where he opened a lot of eyes. He missed almost three months with a leg injury suffered in June, however, and only returned to the Fisher Cats a few weeks ago.
The Jays think that Wilson could benefit from the added playing time in the AFL.

Posted by Clutchlings at 1:31 PM