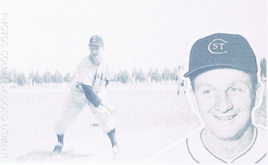 Sometimes, your life can change in an instant - if you can recognize the signs.
In the case of Gord Dyment, it was a sign that someone else saw, but it changed his life just the same.

Dyment was born in Toronto in 1931.  He grew up playing in the sandlots of the city, and gained a reputation as a hard-throwing righthander. A number of major league teams showed some interest in Dyment, and he signed with the Phillies, and headed off to Bradford, PA, to play in the PONY (now New York-Penn League - the O was for Ontario) in the late spring of 1950.
Dyment pitched reasonably well in the then-Class D league, posting a 2-5 4.84 record, but the Phils let him go at the end of the season.
The minors were at their absolute peak in terms of teams and leagues in those heady post-war years. Philadelphia had 12 affiliates, spread across 5 levels. And while Dyment's numbers were respectable, there was so much competition for roster spots at even the lowest levels of the minors, mediocre didn't cut it. There was someone else to take your job if you didn't measure up.  Minor leagues were less about development, and more about culling in those days.
So Dyment prepared himself to start a life out of baseball, and took a job with Canadian Pacific as a railway policeman in the spring of 1951.
At the same time, Jack Beauchamp was on vacation with his family in Florida.  The 19 year old lefthander from Midland, Ontario, was travelling in the family car in the Sunshine State when he noticed a sign advertising a New York Giants open tryout camp.  Beauchamp's father Herb, who played ball as youngster growing up in Michigan, had coached a number of hockey and baseball teams in the Midland area, and was on the executive of the Midland Indians, an entry in the Ontario Baseball Association Intermediate ranks since the 1920s. Jack begged his dad to take the next interchange in order to try out for the Giants.  The defending World Series champs, as it turned out, had their quota of recruits for the day.  Undeterred, Beauchamp Sr talked the Giants into giving his son a look.  Not only did they relent and let Jack show his stuff, they offered him a contract, and sent him off to their Class D team at Hickory, NC.  On top of that, not wanting to miss out on any sources of talent, the Giants made Herb a bird dog scout for all of Southern Ontario.


So, while the younger Beauchamp was heading to North Carolina as spring training broke that year, Dyment was heading to his first assignment at Port McNicoll, a village just outside of Midland.  Dyment didn't even know that Midland had a ball team as he set out for the Southern Georgian Bay area, but Indians officials knew all about Dyment.
Herb Beauchamp convinced Dyment to play for the Indians.  There was a lot of competition for his services, however.  In the Sudbury region, there was a highly competitive league sponsored by the mining companies, and the Copper Cliff team had offered the "amateur" Dyment considerable "expense" money to come north and pitch for them. The clincher for Midland was Beauchamp's New York connections.  As part of his offer to lure Dyment's services, he had a pair of Giants scouts come to Midland, and Dyment threw for them at the Town Park in 1954.  They offered him a contract on the spot, and Dyment was off to Olean of the PONY league for another shot at pro ball.  His job with the railway would be waiting for him when he came home, and so would a spot with the Indians.
Dyment came under the tutelage of the legendary Hall of Famer Carl Hubbell during his stint with the Giants. Dyment rose as far as the Class B Carolina League before deciding to give up his major league dream in 1956.  He returned to Ontario, and pitched for Copper Cliff  for several seasons, before returning to Midland in 1958.
He may have fallen short of the major leagues, but Dyment got a rare second shot at pro ball - all because Jack Beauchamp saw that sign on that fateful Florida day.
Dyment's return to Midland helped to bring about a dynasty in Ontario Intermediate A Ball play for the Indians.  In the next 12 years, the Indians appeared in the provincial final 10 times, bringing home the title on six of those occasions.
In the final game of the 1958 OBA championship against Simcoe, Dyment tossed a 10-inning, two-hit shutout, fanning 17. It was the first title for Midland in three decades.  The jubilant players piled into convertibles, and held an impromptu victory parade down the town's main street.


Dyment continued to be a dominant pitcher for more than a decade.  In 1969, in his late 30s, he struck out 12 in the deciding OBA Finals game against Thorold, and knocked in both Midland runs in a 2-1 Indians victory.
My memories of Dyment started at about this time. My family had moved to Midland in 1967, when my dad was hired by RCA to work in the accounting department of their new picture tube manufacturing facility on the eastern edge of town.
In the late 60s, there was only one televised major league game per week.  When the Montreal Expos were born in 1969, there was an added Wednesday night game.  And that was it.  No sports networks, and little in the way of televised highlights.  The Indians home games on Thursday nights were a huge event in town.  Showing some great foresight, the town fathers of Midland had set aside a huge area of parkland in the centre of town.  The jewel of the park was Little Lake, which became a mecca for campers, boaters, and fishermen from the 20s to the 60s.  Little Lake Park was also home of the Midland Arena, Curling Club, and ball park, in the east end of the park, just off the main street.  Towering mature oaks and maples ringed the sports facilities, giving the ball park in particular a stadium-like feel.  There was a small, octagaonal-shaped concession stand behind home plate, and John Deakos, who ran a successful hamburger stand down near Little Lake, would lug his pails of home-cut fries to fry up during the games.  The aroma of the fries cooking was irresistible.  John charged 5 cents for packages of ketchup, so those of us who only had a quarter for a medium-sized box of fries would go without.  And the crisp, salty fries were good enough to stand on their own.
As game time approached, a steady crowd of seniors set up their lawn chairs behind the home plate screen.  Younger fans filled the first base bleachers behind the Indians bench, while the third base stands were sparsely populated mostly by a handful of fans of the visiting team.  Some fans parked their cars just beyond the centrefield fence to watch. Tom Shields of CKMP, the low-wattage radio station in town, would set up his broadcasting equipment on a swing-up shelf attached to the screen directly behind home plate.
So, by the time I started attending Indians games, Dyment was in his late 30s.  He had a sizable belly, but was still the Indians' ace.  A big (6'3") man, he cut an imposing figure on the mound, with long, frizzy sideburns poking out from under his cap.  By the third or fourth inning, he would be drenched in sweat.  When he threw his curveball, he was able to put so much spin on the ball that you could hear it all over the park. In those rare games when he got into some trouble, neither his catcher nor his manager would come out to visit him.  There wasn't much point - he knew what he was doing.
We all knew that he had spent time in the Giants organization.  We didn't know many details about his minor league career, but it lent him an almost mythic status. Gord spent a fair amount of time helping out at the practices of the Midland minor baseball teams, including mine, and he mentored most of the young pitchers in the organization, like my older brother. When he told you how to grip the ball or swing the bat, you listened.
By the 1970s, most of the core of the Indians dynasty from the 60s had retired, but Gord kept on pitching.  He was even loaned to cross-county rival Orillia Majors for the national championships in 1972, where Dyment threw a no-hitter at the age of 40. Gord hung on with the Indians as younger players (including my brother) filled the roster, but while they were competitive, the Indians were no longer a powerhouse.  He retired from the game in 1975, the year his son Bob, a hard-throwing righthander like his Dad, was signed by the Mets.  A fire at the Arena, which was directly behind the left field fence, spelled the end of the Indians in 1976.  The subsequent demolition of the old building and construction of the new one meant the field was unplayable, and truth be told, the team was having trouble attracting players.  Sadly, I was only about a year or two away from being old enough to patrol the outfield for the Indians, but never got the chance.  The field was reconfigured for fastball, which was gaining in popularity in the area, the following year, and renamed Herb Beuachamp Field, in honour of the man behind the Indians glory years.


Jack Beauchamp played for the Indians himself after a couple of years in the Giants minor league system, then retired to focus on the family's TV and Radio business.  The Beauchamp family was a musical one, and Jack played in many jazz bands for almost a half a century.  A scholarship in his name and memory now helps to further the education of promising young musicians in the Midland area.
When passenger rail service to Midland ended in the early 70s, Gord found employment with Ogilvie Flour Mills, which received prairie grain via lake freighter.  He retired in 1992, and continued to play in a seniors slow-pitch leagues.  Gord passed away from cancer in 2003.  With Herb Beauchamp field closed by the expansion of the Arena in 2004, the town redeveloped the baseball field on the east side of town, overlooking Georgian Bay, and renamed it Gord Dyment Field.

Midland Sports Hall of Fame Images
Posted by Clutchlings at 8:39 AM