Another Look at Jon Harris 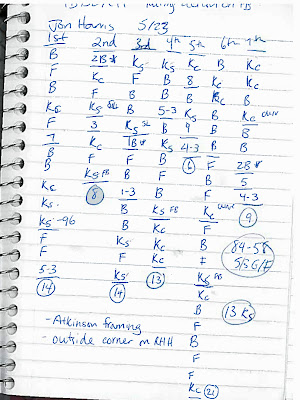 The incredible long weekend weather here in Southern Ontario helped to put what was a crummy April (from a couple of perspectives, personally) firmly in the rear view mirror.  7 weeks ago, Lansing's Jon Harris made an abbreviated full season debut under Arctic conditions in Midland, MI, against the Great Lakes Loons.
What a difference nearly two months makes.  We're wearing shorts, riding bikes, and thinking about dipping our toes into Georgian Bay, and since that two-thirds of an inning stint, Harris hasn't given up a run - a stretch of 32 innings - covering six starts.  In his last start, he threw a career-high 7 innings and 11Ks against Fort Wayne.  On Victoria Day, he may have topped that effort with another 7 shutout innings, and another 11 strikeouts in a return visit to the Loons' nest.

Harris was just filthy and nasty in this outing - here are every one of those 11 Ks:

In facing Great Lakes, Harris was going up against a team with the lowest (.209) batting average in all of minor league baseball - the Lugs are the third worst hitting team in the minors, but were a game over .500 heading into the contest, thanks to their pitching.  Loons hitters were simply overmatched against Harris.
This was a "school day" game, with a 10:30 start, and hundreds of screaming kids in the stands.   Players, understandably, are sometimes less than thrilled with the noise, early start, and the high morning sun.
After not getting out of the first inning as a result of hitting his pitch limit in his last visit to Midland, Harris needed only 14 to retire the side in the first this time, striking out the 2nd hitter on a 96 mph fastball.  He was even more economical in the  8-pitch 2nd, despite giving up a loud leadoff double off the left field wall on the first pitch.
Harris gave up a single in the third, and struck out a pair.  He was using his fastball command to get ahead of hitters, and then either using his sharp slider or an elevated fastball to put the hitter away. Harris' fastball tails away from right-handed hitters, and when he got ahead two strikes on a hitter, he was completely in control.
Harris needed only 6 pitches to retire the side in the 5th, and began mixing in curves and changes in the 6th, his longest inning of the day at 21 pitches.  By the 7th, as his pitch count began to close in on 80, he began to fatigue, and Great Lakes hitters began to make more frequent contact.  He gave up a one-out double that CF Lane Thomas may have lost in the early afternoon sun, but then retired the next two hitters on two pitches to complete his day, and extended his scoreless innings streak.  One of the truest test of a pitcher is how he handles himself when his stuff is either off or fading, and Harris passed it with flying colours.
For the day, Harris gave up only 3 hits and walked one through 7 innings.  He threw 84 pitches, 58 for strikes.  Harris recorded 5 outs via the ground ball, and 3 by fly balls.  He had 13 swinging strikes.

Harris was in complete command of the Great Lakes hitters, and C Justin Atkinson showed some decent framing skills behind the plate.  When Atkinson set up on the outside corner on right-handed hitters, they had no chance.  Harris blew hitters away with his fastball, mesmerized them with his slider, and kept them honest with his curve and change.  There's really little left for him to prove at this level, and you have to think the only thing keeping the organization from moving him up to Dunedin is the two starts he missed when he returned home to Missouri for a funeral.  Many
Posted by Clutchlings at 9:41 AM