More goings on around the Blue Jays minor league system:

The New Lansing Three
In 2012, a number of Blue Jays officials passed through Lansing in order to get a closer look at prospects Noah Syndergaard, Justin Nicolino, and Aaron Sanchez, three prized young arms who had landed in the Midwest League at the same time.  No one knows for sure where the term "The Lansing 3" came from (I suspect it was Richard Griffin of the Toronto Star, though I can't confirm), but the young trio attracted a lot of attention that year.
Lefty Angel Perdomo, andright-handers Sean Reid-Foley and Francisco Rios may not match the projections for the 2012 threesome, but they are getting rave reviews for their performances to date.

Perdomo was an under the radar IFA signing in late 2011.  Like many young Dominicans, his playing experience as a youngster was very limited, and he was quite raw as a result, and the Blue Jays moved him slowly.  Last year, after taking the wraps off him, Perdomo pitched at two levels, finishing at Vancouver.  This year with Lansing, he's been lights out:


The 6'6" Perdomo stands tall on the mound, and gets plenty of extension on his fastball, giving it mid 90s velo and late life.  With his delivery, left handed hitters have difficulty getting a clean look at the ball as he releases it. With his size, he almost seems to be landing on top of them.  Perdomo is generating swings and misses on his fastball, change, and slider this year both in and out of the strike zone.  Midwest League hitters are managing just a .143 average against him.  The knock against him prior to this year was command of that fastball, but he has filled up the zone this year, and has shown an ability to turn a lineup over.  The next challenge for Perdomo is to pitch deeper into ball games - he's been held to between 75 and 80 pitches in his last two starts, but when you strike out 9 and 7 batters, it's tough to go beyond the 5th.
Perdomo was a sleeper prospect for me two years ago.  He was likely one of the reasons former GM Alex Anthopoulos was not afraid to deal much of the organization's prospect depth last July.  AA told Baseball America:


“We feel like with some of these guys, because some of them are so young, a bunch of them are ready to take the next step. We’ve got a lefty, (Angel) Perdomo, who we like a lot and was in Vancouver this year. He’s got great stuff but when they’re at the lower levels they don’t get the notoriety. Once they start getting to the Florida State League and they get to New Hampshire then they really start emerging on the scene."

He's mostly been off the prospect radar, but is about to start lighting things up.


Rios was also a less than heralded IFA signing in 2012.  Unlike Perdomo, the Mexican was considered a fairly polished prospect - Mexicans tend to have more playing experience than their Dominican counterparts have, and Rios moved more quickly, and skipped the GCL after pitching in the DSL in 2014.  He pitched at Vancouver last year, and seemed to find himself after being installed in the C's starting rotation in August, striking out better than a batter an inning for the rest of the season.
Chad Hillman is a Michigan-based, self-professed "Prospect Nut," and made this observation after watching him pitch last week:


Not overpowering, Rios relies on his fastball command to set up his secondary pitches.  And so far, Midwest League hitters are overmatched against him, as he's fanned 33 of them in 24 innings.

Reid-Foley is easily the most recognizable name of the three.  The 2014 2nd rounder was challenged by a promotion to full season ball last year, starting with Lansing, and even spending a few weeks in Dunedin. Sent back to Lansing to work on his fastball command, SRF has shown that he may not be long for the Midwest, limiting hitters to a .177 average in his first four starts.

With 2015 1st rounder Jon Harris pitching well in his first start since spending a week on the Temporary Inactive list, this trio may soon turn into a quartet.

Sticking with Lansing, we have to talk about the Lugs' bullpen, which currently sports a  36 2/3 scoreless innings streak.  Led by vets southpaw Colton Turner and righty Dusty Isaccs (who have accumulated 7 saves between them), the group also features Starlyn Suriel, who couldn't even crack the Lansing rotation even after 18 mostly decent starts last year, Josh De Graaf, a 31st round choice out of NAIA Taylor (IN) University, and Daniel Lietz,  a promising 2013  5th round draft choice who has yet to really put things together, but has pitched well (other than a couple of ERA-inflating bad outings this year).  The group has been bolstered by the addition last week of righthander Gustavo Pierre, who has one of the most interesting stories in the system.  Originally a high-profile IFA signing by the Jays in 2008, Pierre was traded to the Phillies at the end of August, 2014. Traded back to the Jays a year later, Pierre was sent back to Florida to convert to pitching.  Pitching last night against Cedar Rapids, he picked up his first career W in relief of Perdomo.
It's true that low-level bullpen guys do not have a lot of value.  Very few of them progress all the way up the ladder to the bigs.  But with this collection of arms backing up the stars of the starting rotation, the Lugnuts appear poised to make a second consecutive playoff appearance this season.

One more Lansing story.
I really want to start following and writing about Andrew Guillotte, the Lugnuts' sparkplug LF and leadoff hitter, and not just because his dad followed me on Twitter last week.
The 32nd round choice out of McNeese State last year began his pro career with Vancouver, and moved up to Lansing this year.  Lansing broadcaster Jesse Goldberg-Strassler perfectly described Guillotte:


Andrew “G” Guillotte is 5 feet, 8 inches tall. He leads off. He hustles, gets his uniform dirty, steals bases, draws walks, fights through tough at-bats, strikes out rarely, plays multiple positions, is awesome in the clubhouse, and is described in terms of being a “baseball rat” or a “dirtbag” or, at the very least, as someone who utterly loves the game.

His .316 BA and .409 OBP lead the Lugnuts, and put him at around the top 10 in the MWL in those categories.  A player with maybe only one truly elite tool (speed) in his kit, Guillotte has quickly become a fan favourite in Lansing (as he did in Vancouver), grinding out at bats, getting on base, hustling at every opportunity, and doing all that he can do to help his team win.  Guillotte may not be a top prospect, but he's turned more than a few heads with his play already, and will be interesting to follow as he progresses up the ladder.

As good as Lansing's starting rotation has been, Dunedin's has been hit hard, and is one of the reasons the D-Jays, thought to be as good a collection of talent in the system, are two games under .500 a month into the season.  Dunedin's pitching ranks dead last in the Florida State League in ERA, over half a run worse than the next-to-last place team.
Beyond top pitching prospect Conner Greene, the rotation is a bit of a shambles.  Ryan Borucki, who has missed most of two full seasons since being drafted in 2012, is making another comeback, and has had a tough time finding the strike zone this year, and when he has, FSL hitters are hitting him at a .413 clip. Canadian Tom Robson also missed last year recovering from Tommy John surgery, and has had his own command issues, walking 22 hitters in 16.2 IP.  I saw Robson pitch against the Canadian Juniors in spring training, and the young hitters were simply no match for his 96 mph fastball.  Against tougher competition, it's been a different story.  Luis Santos was a stabilizing force along with Greene, but his promotion to New Hampshire has left a hole in the rotation.
Luckily, the Dunedin bullpen continues to be highly effective.  LHP Tim Mayza has only given up one earned run in 15 innings over 9 outings, Adonys Cardona hasn't given up a run in 8 appearances, and Matt Dermody and Alonzo Gonzalez have also pitched solidly.
The best news of all for Dunedin has to be the return of top prospect Anthony Alford.  Alford injured his right knee in the first game of the season, and returned to the lineup last night, DHing and batting second.

It's still incredibly early in the minor league season, but we have enough of a sample size to start making some judgments.  And of those concerns New Hampshire's Rowdy Tellez, one of the top bats in the system.  At first glance, his current .164 batting average would suggest that Tellez is off to another one of his customary slow starts.  When you put his numbers into context, however, you see a bigger picture.
New Hampshire currently sits at the bottom in most Eastern League offensive numbers.  The Fisher Cats .209 average is dead last in the league, and their OBP and Slugging rates are near the bottom. That, coupled with his 23% walk rate would suggest that Tellez does not have a lot of support around him in the lineup, and is not seeing a lot of hittable pitches as a result.  A Tellez AB in a recent game against the Phillies' Reading affiliate was typical of many he's had this season: 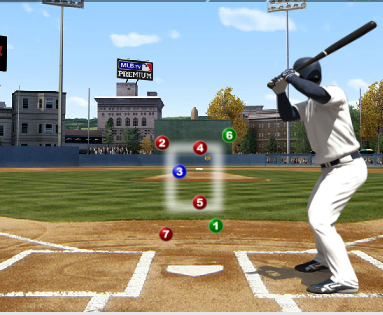 This humble little blog recently passed a milestone of 100 000 page views.  Truth be told, some posts were for another website, and had I known several years ago about how to market content in an online world, the total would likely be much higher.
This accomplishment would not have been possible without the support of my regular readers, as well as the sources that I've accumulated along the way.  Huge thanks to both.  I hope it doesn't take me three full seasons and part of a fourth to hit 200 000 views.