A Look at Angel Perdomo

July 2nd is a date all prospect watchers have circled on their calendars, because that's the day each year that the signing frenzy that is the International free agent signing period begins.
The Blue Jays have been major players on that day, inking the likes of Franklin Barreto, Roberto Osuna, Richard Urena, Lupe Chavez, and one day perhaps the biggest IFA fish of them all, Vladimir Guerrero Jr.
The players who sign on that date are mostly only 16, but scouts have been following them for several years.  These players tend to have the loudest tools and attract the most attention as a result, but there's a group of players that often get overlooked on that date for a variety of reasons.  Scouts tend to get most of their views of each IFA crop through workouts, and there are some players whose skills show up better in game situations. Some are late bloomers who have yet to hit a growth spurt at that tender age.
The Blue Jays Angel Perdomo fits both of those descriptions.
A late season, under-the-radar signing in 2011, the Blue Jays have brought the tall (I've seen his height listed between 6"6" and 6'8", so let's go with 6'7") Dominican southpaw along very slowly, advancing him through the system one step at a time.
He has struck out more than a batter an inning (10.8/9) over his minor league career, but has also struggled with his command (4.6/9) as well.  With his height, he naturally gets an eye-changing downward plane and great extension on his delivery, giving his fastball late life.  Left-handed hitters have a tough time picking up the ball from him.  Perdomo has a nice easy windup, somewhat reminiscent of a lefty Aaron Sanchez - the ball seems to explode from his hand. I have been following him since 2014, and have always been a fan. I was able to catch a glimpse of him in a late-season appearance with Vancouver last year,  and have followed his progress closely.  It was somewhat by default given the trade deadline activity last year, but Perdomo made his way into my post-2015 Top 10 Blue Jays prospects list.

Fangraphs gave this evaluation of Perdomo in ranking him as the Blue Jays 9th prospect prior to the season:


Perdomo’s story is still relatively unchanged: he’s a hard-throwing left-hander with command issues and physical projection left in his 6-foot-6 frame. He continues to pile up strikeouts at lower levels, but the command hasn’t stepped forward yet, and it’s looking more likely it moves him out of the rotation. Both his slider and changeup could be average offerings, but it’s his fastball that’s going to keep him moving forward. There’s interesting upside here in the almost 22-year-old that will start to flesh out more over this season and next. Some big-framed pitchers take a bit longer to control their bodies, but he has a ways to go before looking like a big-league starter.

Baseball America was less enthusiastic, ranking him as the Jays 26th prospect:


He started to put things together in 2015, earning a late-season promotion from Rookie-level Bluefield to short-season Vancouver. Perdomo has strength gains to make, which will help him maintain his delivery. He has some funk to his mechanics, some crossfire action that gives him deception, but has a clean arm that produces 92-93 mph velocity. He ditched a curveball and settled on a slider that flashes average potential when he stays on top of it. He throws a changeup but it's a distant third pitch. His fielding and holding runners need polish. Perdomo gets weak contact with his fastball and should stay in the rotation for 2016 when he moves up to low Class A Lansing.

Promoted to full season ball this year, Perdomo has been lights out for the Lugnuts.  His tiny 1.28 ERA is among the Midwest League leaders, as are his strikeouts (62 in 49 innings), and his .132 batting average against leads all of minor league baseball.  I asked Lugnuts' broadcaster Jesse Goldberg-Strassler (@jgoldstrass on Twitter) what the secret to Perdomo's success has been this year:


Most impressive thing about Angel is that he's getting guys out with three different pitches. I love that. The FB, SL and CH are all effective in and out of the zone. He's just wicked to try to hit against, breaking bats, and unfair against left-handed batters.


Lansing, unfortunately, does not provide a video feed (along with Jesse's excellent play by play) of their home games on milb.com's subscription service, so those wanting to catch a glimpse of Perdomo have had to wait.  His last televised start was against Beloit in late April, but Perdomo took to the mound against South Bend, the Cubs' MWL affiliate, in front of a Sunday Memorial Day weekend crowd of over 7 000.
Hitting 94 with his fastball, Perdomo needed 19 pitches to get through the inning, allowing an infield single that turned about to be South Bend's only hit against him on the day.  He retired the side in order in the 2nd, but needed a pair of fine defensive plays from CF Andrew Guillotte and 2B Lane Thomas to get two of the three outs.
Perdomo struggled a bit with his command in the 3rd and 4th, getting the first two hitters out on three and four pitches respectively, before driving up his pitch count with pitches outside of the strike zone.  On some pitches, he seemed to rush his arm action during his delivery, and he bounced a few sliders in the dirt.  Perdomo issued a two-out walk in the fourth, but a nice play on a groundball up the middle to force the runner at 2nd by SS Gunnar Heidt ended the inning.
In the 5th and 6th, Perdomo was much more economical with his pitches, needing only 21 to get through the two frames.  As his velocity began to drop, he relied more on his slider - his fastball did show some good movement to right-handed hitters, getting in on their hands in a hurry.
The 7th inning saw Perdomo pitch past the 6th for the first time in his career.  He needed 17 pitches to complete the frame, but he continued to get weak contact, before getting a flyball out to complete the frame: 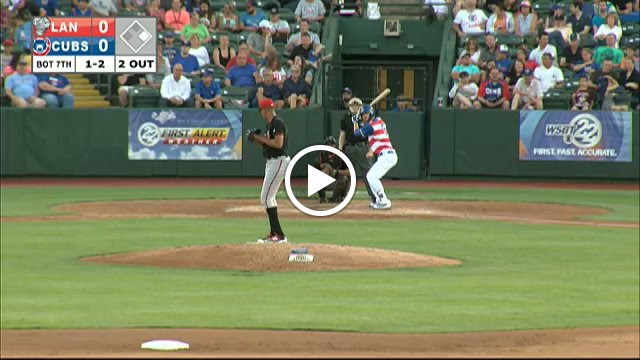 On the day, Perdomo threw a career-high 96 pitches, 57 for strikes.  He threw first-pitch strikes to 13 of the 27 hitters he faced, although with a 59% strike percentage, he was often behind in the count. He generated 5 swings and misses on the day.  Perdomo clearly did not have his best command on this occasion, as generated by his 3 strikeouts, which was well below his average.  On days like that, however, you can tell a lot about a pitcher, and even though he was not at his best, Perdomo held the Midwest League's leading offence in check, limiting them to that first inning infield single, a pair of walks, and a hit batter over his seven innings - South Bend did not advance a runner as far as 2nd Base.
Blue Jays minor league pitching coordinator Sal Fasano was in the Lansing dugout for the weekend series, and told Milb.com that he was impressed with Perdomo's work:


"A very good, positive outing, first and foremost," Blue Jays pitching coordinator Sal Fasano said. "He had a nice balance of pitches and continues to work on his off-speed stuff, making a commitment to execute the plan during the game. He's got great deception in his delivery which helps make his fastball look that much harder.  It's nice to see him put a plan together and go out and do it. His deception, his high fastballs, it allows him to get away with some pitches. So we just want to continue to take his best attributes and make them better and better."

At the same time, Fasano acknowledged Perdomo still has room for improvement:


"The biggest thing with him is repeating his delivery," he said. "He's making quality pitches -- or pitches in the zone where he wants them -- around 70 percent of the time. But he still falls off to the third-base side of the mound, although not as bad. It's a work in progress, but he's making some big strides. When he starts repeating his delivery with more consistency and starts executing pitchers at a higher rate, he'll move quickly. He has the ability to have a pretty good slider, so hopefully, we can work on that and master it. But the development of his off-speed pitches still has a ways to go.

A scout who covers the Midwest League for another organization sees Perdomo as a potential gem that still needs some polishing:


I like Angel's potential, but there is a concern about his mechanics. He has trouble repeating a delivery,  and it makes his command in the low end of the strike zone sketchy. The kid is all legs, and it does create a fair bit of deception in terms of fast ball velocity. He has a good 4 seamer at the top end, but I would be concerned about moving up without the lower zone command. He lives off the 4 seamer up and more disciplined hitters will not swing as much as the lower A guys. Physically, he has an outstanding lower body but with his mechanics some times it is synergistic, but too often his arm drags or is too quick, which causes him to fall off to his glove hand side, in poor position to field the ball. In short, it is definitely a guy that can move quickly, but not until he is better in his mechanics and consistent with them. He is getting a lot of guys to chase the high 4 seam fast ball in the mid west league. If he can develop the 2 seam and change low, with the hook, then he will not be around the Midwest League long.

Tall southpaws seem to take longer to develop, and Perdomo appears to be no exception.  His command issues are still his biggest challenge, but he has more than held his own against Midwest League hitters. Getting Low A hitters out is one thing; continuing to do so against hitters with greater pitch selection skills who can turn on a fastball better will be a bigger challenge for him as he moves up the ladder. An imposing presence on the mound, he should get every opportunity to improve and challenge himself further with a promotion to Dunedin at some point in the second half of the season.

Posted by Clutchlings at 3:01 PM