Is it Time for Rowdy?


One of the joys of writing about baseball prospects takes place when the team you follow lands a player in the late rounds of the June amateur draft that even though he was highly ranked, fell in the draft because of a college commitment.
Rowdy Tellez, for me, was perhaps the ultimate late-round choice by the Jays.
A batting-practice legend on the Showcase Circuit as a high schooler, Tellez was thought to be headed to USC after his senior season.  Taking advantage of new rules regarding slot values in the 2013 draft, GM Alex Anthopoulos and his Amateur Scouting Director Blake Parker found a way around the slots, drafting low-leverage college seniors in rounds 4 through 10  (except for California HS P Conner Greene) , and offering them slim bonuses (Matt Boyd, traded to the Tigers as part of the David Price deal, received a $75 000 bonus as a 6th rounder: Chad Girodo, taken in the 9th round, signed for a $5 000 bonus.  The Blue Jays used those savings to sign Tellez, who they took with their 30th round pick,  at a bonus of $750 000.


The Blue Jays have taken Tellez' development slowly and steadily, giving him two years in short season ball before starting him in full season at Lansing in 2015.  The knock against him prior to the draft was that he was a base-clogging, one dimensional slugger, but Tellez has worked hard at many aspects of his game to become more of an all-around player, and his time in short season allowed him to sand off the rough edges.
Tellez checked in at about 275 lbs when he left high school, but through a dedicated regimen of nutrition and conditioning, he now weighs 245.  Tellez admitted that he knew little about how to eat properly, or even prepare his own food until recently, but has come a long way in that regard.
As for improving his defence, Tellez has worked on his agility, and infield coordinator Mike Mordecai worked extensively with him on his footwork and positioning around 1st base over the past two seasons. Tellez may not remind anyone of Wes Parker, but he has upgraded his skills tremendously.  "Everybody is confident in throwing the ball over to me and pitchers don’t worry about ground balls hit to me," he told Fangraphs' David Laurila. "Defense is what I’ve worked on the most. I’ve worked on it day in, day out."
At the plate is where Tellez excels.  His strike zone management was what convinced the organization that he could handle the jump to AA this year after only one season of A ball.  And he has modelled himself after major leaguers like Adrian Gonzalez and Anthony Rizzo when it comes to his approach with two strikes.  He told Laurila:


I look at how easy Gonzalez swings and I’ve adopted a little bit of what Rizzo does with two strikes. He takes out his leg kick and works on driving the ball the other way. He knows he can hit home runs to all fields, even with a two-strike approach and not having the leg kick. That’s what I’m doing now. If you can eliminate strikeouts… it’s a huge game-changer.

Tellez' spray chart from 2016 would seem to bear that out.  Half of his doubles were to the opposite field (while only 1 Home Run was): 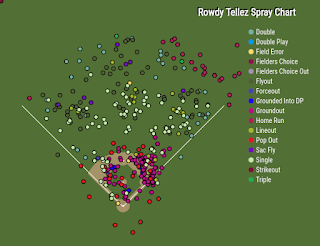 Tellez got off to a rocky start with New Hampshire in 2016, and was hitting only .164 at the end of April. Some of that could be attributed to the fact that he saw very few pitches to hit over that opening month, with ABs like these being fairly typical: 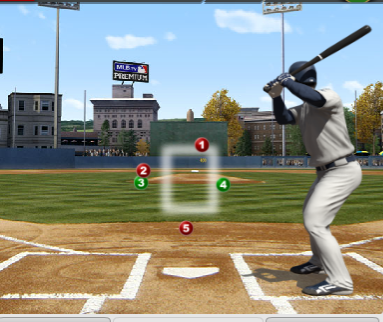 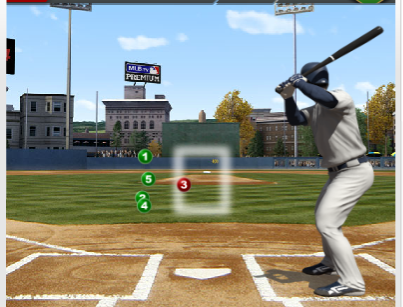 Despite seeing few strikes and even fewer fastballs, Tellez still posted a .345 OBP for April.  As the weather heated up, so did Tellez and his Fisher Cats teammates, with his OPS climbing every month, culminating in a 1.046 mark for August.  In his first year of AA ball, where he was one of the youngest players in the league, Tellez managed 54 extra-base hits, and posted an impressive 12.4% walk rate.

With Edwin Encarnacion gone, and Jose Bautista seemingly set to follow, there may be a looming power shortage in the Blue Jays lineup.  Kendrys Morales' approach and swing may be far more suited to the Rogers Centre than many fans would realize, and Steve Pearce's value and versatility can't be understated, but barring a move in the New Year to bolster the starting lineup, it appears that maybe the Blue Jays are leaning toward Tellez earning a 25-man roster spot this spring.  The ideal plan would be fore him to receive at least a half season of AAA experience, but it's not unusual for a player to bypass that level once he's proven himself in AA, either.
Tellez is what he is:  a bat-first player, who will not get any faster or more agile as he ages.  But just as Encarnacion worked hard to become at least an adequate 1st Baseman, so has Tellez, and he has shown the work ethic that makes one think that he could continue to improve his defensive skills.  He profiles as a put-the-ball-in-play, make the pitcher work (I've been charting his ABs for the first few weeks of the 2016 season, and have him at just over 5 pitches/PA), use the whole field, and change the approach with two strikes kind of hitter that this lineup proved to be sorely lacking down the stretch last year and into the ALCS.  There is some thought that the slight hitch in his swing might be exploited by MLB pitchers, but this is a player that has made adjustments throughout his career (despite a 1-37 stretch in 2014 with Bluefield, he still finished with a .293/.358/.424 line), and considering his strike zone judgement, will likely continue to do so.  Whether or not it happens this April, at mid-season, or in 2018, Tellez should be a fixture in the middle of the Blue Jays lineup for years to come.

Tellez' swing has remained largely the same since this BP session in high school:

Posted by Clutchlings at 8:23 AM