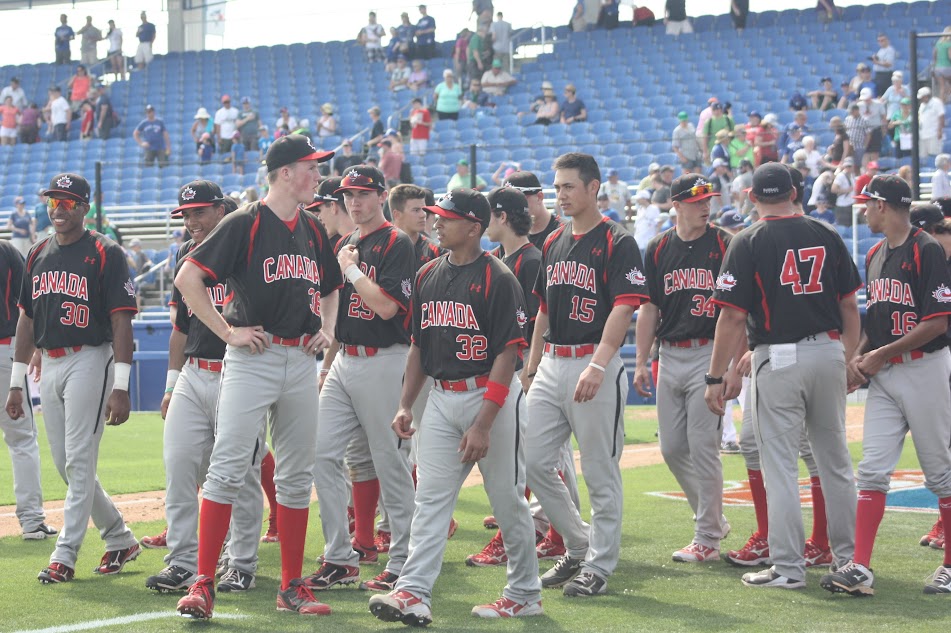 A fuzzy-cheeked group of young Canadian ballplayers received what was likely the thrill of their young lives when they faced off against a lineup comprised largely of Canadian Blue Jays prospects at Florida Auto Exchange Stadium in Dunedin this week.
As might be expected, the Canadian Junior National Team was no match for the older and more experienced Jays, losing 10-0, and managing only one baserunner on the day.
Still, it was an excellent experience for the youngsters, and it was great to see several Canadian-raised Jays prospects get a chance to shine in front of a crowd of just over 3000.

For the Junior Nats, the spotlight was on C Andrew Yerzy, widely expected to be the first Canadian high schooler taken in the June draft.  The 6'3"/210 Yerzy looks every bit the athletic, Matt Wieters-type of receiver.  He, like his teammates, was overmatched by major league offspeed pitches on the day, but his erratic pitching staff gave him ample opportunity to demonstrate his excellent pitch-blocking skills.  The Blue Jays showed Yerzy's arm little mercy, as leadoff hitter Dalton Pompey took off on the first pitch after leading the game off with a single.  Pompey had an excellent jump, as the Canadian Juniors' pitching staff had some trouble holding runners, and Yerzy rushed his throw, sailing it into centrefield as Pompey scampered for 3rd.  Yerzy did seem to have some concentration lapses with some passed balls, but in fairness to him, he was out there for a long time in the early innings.  Still, Yerzy demonstrates excellent athletcisicm, and the York Mills Collegiate student will be a far better player a year from now.

RHP and fellow Torontonian Sam Turcotte actually struck out the side in the 8th, sandwiched around a walk, single, and line drive off the bat of D.J. Davis that the Canadian leftfielder made a gambling leap on and missed, allowing Davis to move all the way to 3rd.  Turcotte only topped 87 with his fastball,  but his size (6'5") gives his him great extension and late life on it, and it's easy to project more velo if he's drafted in June.  Turcotte was tutored in the art of the change up by former Jay Paul Quantrill, and he used it effectively.


On the Blue Jays side, a couple of players stood out.  RHP Tom Robson from Ladner BC, who missed much of 2015 recovering from Tommy John surgery, hit 96 with his fastball, and mowed through the Juniors' lineup, throwing 3 perfect innings, striking out 3, and needing about 25 pitches to do so.  There's every chance this is your breakout Blue Jays prospect this year.

Toronto's own Connor Panas doubled, homered, and walked, hitting a pair of balls hard, and showing a great approach at the plate.  The 9th round pick in last year's draft is making a strong case for opening the year in full season ball with Lansing.

Yet another Torontonian, Mattingly Romanin, son of the Jays' front office employee Mal Romanin, made up for a baserunning gaffe - Romanin came into the game as a pinch runner, but was doubled off of first when he took off for 2nd on a flyball.  In his first AB a few innings later, Romanin crushed a one-hop double off of the centrefield wall.

Finally, crafty lefty Shane Dawson showed the Juniors a mix of speed changes, location, and pitch sequencing that they've likely never seen before, striking out 5 of the 6 hitters he faced over the final two innings.

I had originally planned to head a few blocks east to the Jays minor league complex to catch the afternoon inter-squad games that would be played there, but changed my mind at the last moment, and decided to take this game in.  It was a great opportunity to see the young Canadian players on both sides in action.
Posted by Clutchlings at 3:23 PM