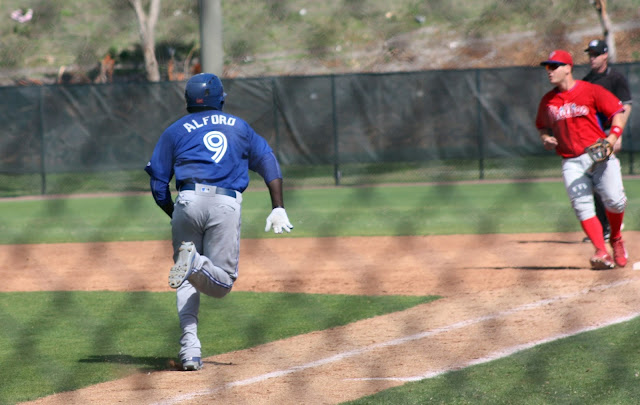 It was a warm (by Florida standards - hot for a guy from significantly north of there) March Tuesday afternoon when the Blue Jays and Phillies AA teams squared off for a pair of games on adjacent fields at the Phillies minor league complex.
A galaxy of top prospects did battle:  for the Jays, Sean Reid-Foley, Rowdy Tellez, Anthony Alford, DJ Davis, Conner Greene, and Richard Urena were in action.  For the Phillies, Mark Appel, Roman Quinn, Nick Williams, and J.P Crawford were in the lineup.  For good measure, Ryan Howard took a few swings.
For me, I was thrilled to see all of these players, and to meet in person my fellow blogger and Tweep +baseballbetsy and her husband @BaseballRoss.  The couple live in Dunedin, and follow Blue Jays and Phillies minor leaguers who play out of the local complexes avidly.
It was grass roots baseball - no scoreboard, just a handful of fans, and no walk-up music.

Reid-Foley showed some streamlined mechanics from last season.  As a result, he pounded the bottom half of the strike zone consistently, and matched up well against Howard, getting him to pop out.  Another player who stood out as well was UT David Harris, who has not stopped hitting since Australia, barreling up a couple of balls on the day.  Davis, whose reads in CF have been questioned,  made three fantastic plays:  a pair of diving grabs on sinking liners to save runs, and a reaching grab of a liner just shy of the warning track that would have meant extra bases.  Utilityman Jason Lebelbijian took over from Urena at SS halfway through the game, and ranged far into the hole behind 3rd, failing to nab the runner at 1st, but saving a run in the process, and then snaring a screaming bad-hop liner on the bounce before firing to Ryan McBroom at 1st for the out. Former Jay Jimmy Cordero (who went to the Phils in the Ben Revere deal) flashed what was likely triple digit velo, but had command issues, wild pitching Harris in to score after he had lined a double down the left field line.

On the other field, Greene pitched well, but gave up a towering Home Run to minor league veteran Jake Fox.  Not to be outdone, Tellez (whose size really has to be viewed close up to be appreciated) just missed clearing the 30-foot high batter's eye in straightaway center, settling for a double, before homering against Appel in his next AB.

I should also add that whoever was shooting video at the adjoining field was about 8 feet away from where I was standing.

Alford walked a pair of times, and beat out an infield single late in the game.  Righthander Will Browning had righthanded hitters making momentary bailing motions, but gave up some rockets to left-handed hitters in the 9th.
It's the smallest of sample sizes, and because there was a need to expand the roster because two games were happening at once, so we shouldn't read anything into the Blue Jays prospects who played in this game. New Hampshire may not be on the plane ticket some of them receive when spring training ends.