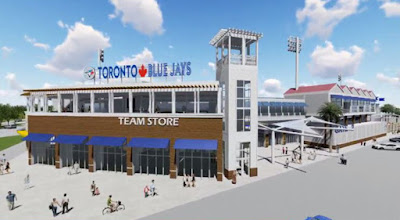 After a couple of years of negotiations, the Blue Jays and the City of Dunedin came one step closer to completing a new spring training facility agreement to replace the one that expires next year.

Dunedin is the only spring training home the club has ever known, a fact Blue Jays President Mark Shapiro acknowledged to residents at a public meeting held in the Florida town on Monday night.

The main feature of the $81 million agreement, which will keep the team in Dunedin for the next quarter century once it is finalized, is a significant makeover to Florida Auto Exchange Stadium, home of the Blue Jays spring training games, and the team's High A affiliate, the Dunedin Blue Jays. FAES has been charitably described as "quaint, but outdated."

The Blue Jays have always preferred to have their minor league complex and spring training stadium, which are currently about an 8-minute drive apart, under one roof, but recognize that space is at a premium in Dunedin.  Upgrades to the Mattick Complex will be part of the improvements, but the majority of the expenditure will be building a more fan-friendly stadium.  Those in attendance at the meeting were able to view a video of these proposed enhancements created by the architectural firm Populous, which specializes in stadium construction and renovations.  According to the Tampa Bay Times, Populous says the improvements will add to the "intensity and intimacy of the game," as well as increase stadium capacity  by 3 000 seats.

According to one of the attendees at Monday's meeting, the improvements to FAES include a berm with popular lawn seating along the 3rd baseline, a Tiki Bar in right-center field, a playground for kids, and several breezeways to help improve stadium ventilation.  With the park sheltered somewhat from the breezes off of the Gulf, the last upgrade may help thick-skinned northerners on hot March afternoons.  A year-round Blue Jays merchandise store will also be part of the project.

The Bobby Mattick minor league complex will be enlarged to accommodate three new fields, with a state-of-the-art training and medical facility in the middle of the complex.  This had been high on Shapiro's wish list of upgrades.  My great internet friend +baseballbetsy , who was part of the Dunedin committee, wrote a very detailed and thorough post about the new facilities and the whole process here.

Timelines for the project are said to be very aggressive, with most of the work completed by the opening of 2019 spring training if the project is approved.  The deal has yet to be approved, and sources of financing on Dunedin's part still need to be worked out, but the Blue Jays are now that much closer to staying in their spring training home of 40 years.