The Toronto Blue Jays today released their list of invitees to Instructional League play in Florida.
The league dates back to 1958, and has served as a place where top prospects can go to receive more detailed and intensive instruction from the team's staff of minor league instructors.  It can be also used for rehabbing veterans who missed time due to injury, or minor league players who are being asked to switch positions.
Instructs, as it's commonly called, begin in late September, and wrap up in late October.  A typical day begins with on-field instructions and drills from 9 am until noon, and then a game played under controlled conditions at 1 pm. It's a key time for the organization's top executives to watch and evaluate these players in person.
An invitation to Instructs signals to a prospect that the organization thinks enough of their potential to invited them down to further refine their skills.  The time can be very valuable.  RHP Sean Reid-Foley was taught a new, simplified delivery at last fall's instructs, and had a dominant season at two levels before being shut down in August.  Other times, pitchers are sent to Instructs to work on a new pitch, or refine command of one of their secondary pitches. 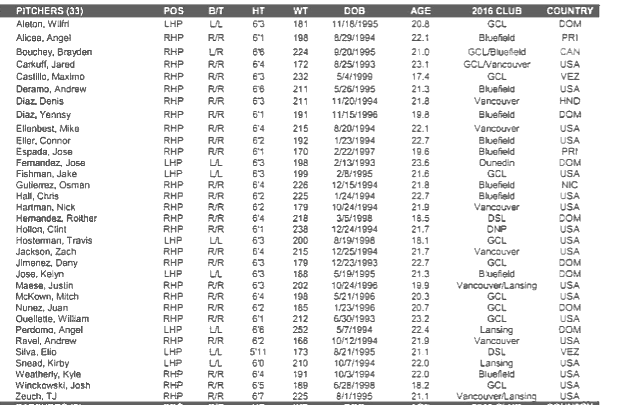 A couple of names stand out:
-Maximo Castillo, who more than held his own as a 17 year old in the GCL this year.  His numbers weren't glittering (17% K rate, 3.74 FIP) but he was one of the youngest players in the league.
-Yennsy Diaz may have led Appy League qualifiers in ERA, but after finally starting to work more down in the zone in August experienced some success.  He sat 93-95 with his fastball for much of the season.  He's raw, but still has lots of projection left.  Here's a look, thanks to Baseball America:


-Jose Espada was the club's 6th round pick from Puerto Rico in 2015, and had a successful debut season in the GCL.  He did not fare as well in the Appy League this year.  He's another one of those long, lean, athletic pitchers the organization covets.
-Clinton Hollon is an electric-armed pitcher who has missed two seasons due to Tommy John surgery (2014), and a pair of drug suspensions (2016).  He is looking to get his career back on track.
-Zach Jackson was selected in the 4th round this past June.  He pitched mostly in relief in college, and pitched exclusively out of the bullpen after being drafted, striking out 23 in 17 innings with Vancouver.  He could move quickly through the system in a relief role.
-Kelyn Jose has an absolutely electric arm, hitting 100 several times with his FB this summer with Bluefield.  He sits 95-97, but has had his troubles finding the plate, walking more (19) than striking out (17) in 17.2 innings.
-Justin Maese is easily the most impressive name on this list.  In only his second pro season, the 2015 2nd rounder out of Texas HS ball advanced as far as Lansing.  Last year at Instructs, he learned a new slider from departed Blue Jays minor league pitching coordinator Sal Fasano.
-Angel Perdomo led both the Blue Jays system and the Midwest League in strikeouts with 157 in 127 innings.  Perdomo seemed to wear down a bit in August, although he may have been working on his secondaries in order to get to the next level.
-2016 1st rounder T.J. Zeuch gets great extension from his 6'7" frame, and will no doubt have his mechanics and secondaries fine tuned this fall.

-Ryan Gold was a 27th rounder out of South Carolina HS this year, and hit well (.280/.359/.402) in the GCL this summer.
-Javier Hernandez is a defence-first player who has already drawn raves about his play behind the plate.  His bat, to this point, has been a different matter.
-Matt Morgan was a highly regarded 4th rounder in 2014 who has struggled greatly (.151/.253/.240) in his three years of pro ball.  Despite his experience, he was the youngest Catcher on Bluefield's roster to open the season.
-Max Pentecost missed all of the 2015 recovering from a pair of shoulder surgeries.  The 2014 1st rounder returned to action with Lansing in May, and was promoted to Dunedin in July.  He hit .302/.361/.486 at both levels.  His 2016 action, of course was all at DH, and with the bevy of pitchers at Instructs, he will be needed to help catch them.  Don't expect him return to his duties behind the plate in game action until next Spring Training, however.
-Yorman Rodriguez has mashed (.318/.379/.438) in two years of pro ball, and earned a promotion to the GCL this summer.  He split his time with the GCL Jays between DH, C, and 1B, indicating that maybe a position switch will be coming up down the road.

-Bo Bichette's name jumps off this list for prospects not named Vladimir Guerrero Jr.  The 2016 2nd pick was hammering GCL pitching (.421/.440/.724), and was rumoured to be on his way to Bluefield when a ruptured appendix interrupted his season on July 21st.  He missed over a month, but came back to go 3-8 in the final two games of the season.  Bichette split time between 2B and SS this year, but the son of the former MLBer will be given every opportunity to stick at short.
-Cavan Biggio, another son of a former Major Leaguer (and Hall of Famer) acquitted himself well mostly at Vancouver his summer after being taken in the 5th round ouf of Notre Dame in June.
-What more can we say about Vladdy Jr?  As a 17 year old, he was one of the top prospects in the Appy League, demonstrating great strike zone judgement.  A late season slump caused his numbers to tail off a bit, but he's the real deal.  From all accounts, he was at least adequate at 3B, and the organization will no doubt want to further develop his skills at the hot corner.  Vlad was at Instructs last year, and hit a few of these:

-Bradley Jones led the Appy League in Home Runs and RBI, leading the league in Total Bases and Slugging, and was 5th in OPS.
-Nash Knight hit .402 at Bluefield in his second pro season, but didn't have enough ABs to qualify after being promoted to Vancouver in August.
-Mitch Nay was once one of the organization's top prospects, and was invited to spring training with the big club last year, but missed almost all of this year due to back problems.

-Josh Palacios stands out on this list to me.  The 2016 4th rounder may already be one of the best athletes in the organization, with quick-twitch skills at the plate, in the field, and on the base paths.
-J.B. Woodman was the team's 2nd round pick this year, and after spending most of the summer with Vancouver, hit .441/.487/.588 in 9 late season games with Lansing.
-Chavez Young turned some heads in the GCL. The Freeport, Bahamas native (by way of Georgia HS) had 6 multi-hit outings over a 7 game stretch in August.  He heads up one of the more talented OF groups to attend Instructs in several years.

There are other names on this list that might stand out to others, but after five months of watching box scores, live MiLB Gameday feeds, live streamed games, Twitter
observations, and emails with personnel across the system, these are the ones that stood out the most to me.

One final note:  it has not been confirmed, but sources indicate that an announcement about the Blue Jays spring training facilities in Dunedin will be made in Florida on September 26th.  It has been suggested that a vastly improved (or replaced) Florida Auto Exchange Stadium will be the centerpiece of the new deal between the city and the team to replace the one that will expire next year.
Posted by Clutchlings at 6:39 PM