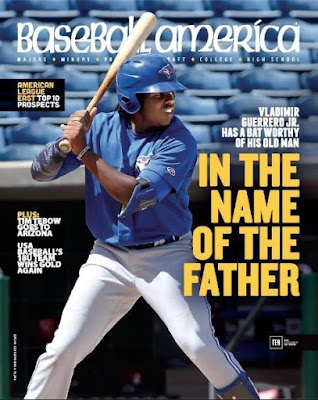 After naming him the Blue Jays' 10th prospect last year, I was going solely by reputation.  This year, after getting glowing reports on him and watching a great deal of video of his plate appearances, I am all in.

It's quite an accomplishment for a 17 year old with one season of short season experience to make the kind of leap Vladdy Jr has made, but his pitch recognition and bat speed make for a lethal combination of eye-to-barrel skills.  His baseball instincts and the strides he made on defence this year are just icing on the cake.  The biggest concern heading into his first year of pro ball was what his ultimate position will be, but he made such drastic strides in his footwork and release that scouts now profile him as an adequate corner sacker at least - the Edwin Encarnacion comps are becoming more and more numerous (although he's a better base runner than Edwin).  Even if Guerrero does eventually cross the diamond, his skills at 3rd now at least give the Blue Jays potentially more roster flexibility one day.

The well-respected John Manuel of BA compiled the Blue Jays Top 10, and here are some highlights from his evaluation of Vladdy Jr:

Guerrero does just about everything evaluators want to see in a teenage hitter. He has tremendous hand-eye coordination and bat-to-ball skills, to the point he seems to have been born to hit. His special hands allow him to manipulate the barrel and square up pitches of all types. He has excellent strike-zone judgment for a 17-year-old, walking nearly as often as he struck out and showing an ability to lay off breaking balls that will be further tested at higher levels. He has tremendous raw power and showed the ability to drive the ball to all fields at an advanced rate for his age. Guerrero covers the plate well and should be an above-average hitter with 30-plus homer potential down the line

Manuel on his defence:


Defense was rarely a focus of his as an amateur, and moving to third base from outfield has prompted Guerrero to work harder on all aspects of that side of the ball. He has improved his short-area quickness and arm strength the most. If he keeps working on his defense, he should have average range. Once owner of a below-average arm, he now flirts with a plus tool. His footwork has improved as well, and he made the routine play with some reliability in his debut

On this note, I can't help but be impressed.  Unless the Rogers Centre undergoes a massive renovation that moves the outfield walls back, this will be a team that will always need starting pitchers that induce groundballs, and they can't always afford to carry a strictly bat-first infielder if they continue to assemble that kind of rotation.

His potential may not match his father’s, but he won’t shame his dad’s name as a ballplayer. He figures to reach low Class A Lansing in 2017, and he could make it hard for the Jays to keep him from getting to the big leagues by the time he’s 20.

The biggest concern about Vladdy Jr is his body, and while he's shed some baby fat, there's still room to grow.  Still, this is an organization that transformed Roberto Osuna and Rowdy Tellez from soft-bodied types to more svelte, athletic versions of themselves.  It doesn't hurt that Mark Shapiro is putting together a state-of-the-art high performance division that will help enhance the nutrition and conditioning of the organization's players.  It will take some time, but it's easy to see Guerrero making considerable progress in his fitness and agility with the regimen the team has put him on.  Video from Lansing in early September shows that he's already shed some pounds.

Here, for your off season viewing pleasure, is a montage of four Guerrero ABs at Bluefield's beautiful Bowen Field from this summer:

Even in this relatively small sample size, Guerrero's strike zone judgement is readily apparent.  Even though he will be fed a steady diet of breaking balls at the higher levels of the minors, this series of ABs show that he's already seen quite a few, and is skilled at laying off of the ones outside of the strike zone.

The loudmouth in the background, by the way, is a Bluefield institution by the name of Henry Belcher, and while his dedication is admirable, a Bluefield staffer charitably described trying to watch a game with Henry in the crowd as "incredibly annoying."

About the only things Vladdy Jr shares with his hall-of-fame bound father is a number and exceptional bat speed.  Sr was a true five tool athlete, but one wonders what his career offensive totals may have been had he had his son's gift for pitch recognition.

For those who are hopeful of catching Guerrero and his Lansing Lugnuts online next year, Lansing GM Nick Grueder says that while the team is in the process of putting the infrastructure in place for live streaming Lugs' games, if may not be ready for next season. I, for one, can't wait to sit in the stands in chilly Lansing in April to get my first live glimpse at this major leaguer to be.
Posted by Clutchlings at 12:24 PM