What to Expect From Mike Ohlman 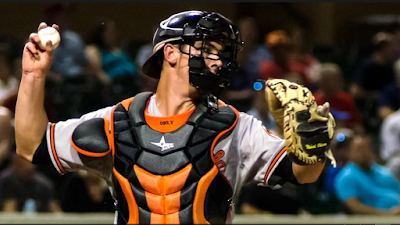 The Blue Jays came to terms with free agent minor league C Mike Ohlman last week.
The lanky (6'5", 240) North Carolinian played travel ball with Will Myers, and was a highly regarded prep player.  The Orioles drafted him in the 11th round in 2009 (he had committed to Miami), and signed him to above slot ($995K) money.  There were concerns about his long term future behind the plate, however, as Baseball America noted in their draft report:


He's tall for a catcher at 6-foot-4, and his slender 200-pound body doesn't seem suited to the position for the long-term, scouts worry. But he has shown excellent athletic ability, and he should be able to remain a catcher at least through college. He has excellent arm strength, but his receiving skills are less advanced than his Florida prep rivals. He has improved his skills behind the plate but has a long way to go in terms of blocking, framing pitches and learning other nuances behind the plate.

Still, Baltimore added him to their 40-man roster, and he was the O's 15th-ranked prospect after his first pro season, seeming to be headed toward bigger things.  His career took a step backward in 2012, when he missed time due to a spring training car accident, and a second positive test for a recreational drug.  While his receiving skills were still in question, his bat was developing, and he led the Carolina League in hitting in 2013.  Baltimore reportedly like his game-calling skills, but there were still huge concerns about his blocking skills, and by 2014 he was spending time at 1st Base, bringing comparisons to another O's draft pick who was selected as a Catcher, but was eventually moved off the position by the name of Jayson Werth.
When Ohlman struggled in his first year of AA, the Orioles soured on him as a long-term prospect, and he was DFA'd in January of 2015.  Picked up by the Cardinals, he showed some improvement behind the plate under the tutelage of Cardinals Manager Mike Matheny, a former Gold Glove-winning tall Catcher himself, but his projection had changed to MLB backup.
In his 8th pro season, he began the year at AA, and finished with AAA, establishing himself as Memphis' everyday Catcher over the last month of the season.  His work with the bat was decent (.280/.333/.464 in 54 games) with Memphis, so I thought I would take a look at some of his body of work this summer.
Admittedly, watching several innings spread over four games does not give the whole picture, but some aspects of Ohlman's game behind the plate became evident:
-he is a decent blocker of pitches in the dirt, but his sheer size means that unfolding his large frame costs him some agility, and he takes a split second longer to get to balls that bounce off to the side;
-his larger size means that pitch framing can be something of a challenge:  while he can get to low pitches in front of him, he has trouble positioning himself in a manner than can help him get extra strikes with just a slight bit of movement.  This is not illusory - Hardball Times has looked into the matter.
-he does appear to be a good pitch caller and handler of pitchers.  Working with one of the youngest pitching staffs in the Pacific Coast League, he seemed to have a calming influence on struggling starters.
-pop ups around home plate can be a bit of an adventure for Ohlman.  He had trouble tracking several of them.
-despite an above average arm, he struggled throwing out base stealers in AAA.  This could be owing to his pitchers' inability to keep runners close, but he skipped throws to 2nd, and generally had trouble controlling the running game.

At the plate, his swing can be a bit long, but Ohlman offers above average potential power.  His bat has been ahead of his glove for some time, and probably always will be.  There is thought that once he incorporates his lower body into his swing more consistently, he will fulfill that power possibility.

The acquisition of Ohlman gives the Blue Jays added depth both behind the plate and at 1st.  With A.J. Jimenez now the current favourite to win the back up job to Russell Martin barring any moves by the organization before spring training, that should mean Reese McGuire should get the majority of the reps at Buffalo, with Danny Jansen likely moving up to New Hampshire (after a solid fall campaign in the Arizona Fall League), in order to give Max Pentecost much-needed time at the position with Dunedin.

Ohlman has made progress with his receiving skills, but it's hard to see him challenging for an MLB job, even as a back up, at spring training this year.  The Blue Jays may look to get him out from behind the plate more often in order to take advantage of his offensive skills.