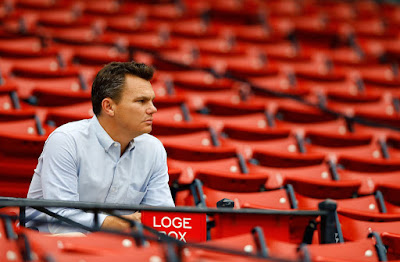 In the midst of a pennant race last fall, the Blue Jays made an acquisition that may have escaped the attention of most fans, but served as another piece in the puzzle that President Mark Shapiro has been putting together to shape the long-term foundation of the team by hiring former Red Sox GM Ben Cherington to become their VP of Baseball Operations.

Cherington had taken the Red Sox from worst-to-first in 2013, leading a team that had finished last in the AL East the year before to a World Series title.  Along the way, he oversaw the addition of elite prospects like Mookie Betts, Xander Boegaerts, and Jackie Bradley Jr, as well as the since-traded Yoan Moncada. After signing free agents such as Pablo Sandoval, Hanley Ramirez and Cuban Rusney Castillo, the Red Sox found themselves back in the cellar in 2014 and 2015, and after Dave Dombrowski was brought in to oversee the organization, Cherington chose to resign rather than continue with the Red Sox.

Cherington spent a year away from the game, teaching sports management at Columbia University in New York (he has a Masters from Mass-Amherst in Sports Admin).  During that time, he spent considerable time contemplating his future in the game, and came to the conclusion that it did not necessarily have to be in the GM's chair.  He told the Boston Globe:


There probably was a time in my career where I was aspiring to a title because at a certain point in your career, and if you have aspirations to be a GM, which I did, there are steps you have to do to get there,” he said. “There are titles that are of importance to some degree as you’re sort of building yourself to be prepared to be a GM and then be a GM. I was aspiring to that. I don’t feel that anymore.


Enter Shapiro, who hired Cherington as an Advance Scout in 1998, before he left for Boston.  Shapiro knew about Cherington's revised aspirations, and jumped at the chance to bring one of the most respected player development minds in the game (prior to becoming the Sox' GM, Cherington held various positions in the Boston front office, including Coordinator of International Scouting, and Director of Player Development) to Toronto.  For Cherington's part, he said in an email that he was looking for the right situation to make his return to the game:


When I started looking for a job last summer I was focused on finding an opportunity with the right group of people, in a place where I could make a contribution, and in a place where I could learn.  The Blue Jays opportunity checked all of those boxes and I was fortunate that they felt I could be of some help.  Since I’ve been here I’ve gotten to know the group even better and feel really fortunate to work with such a strong group of smart, humble people who are focused on getting better every day.


As VP of Baseball Ops, Cherington is responsible for all aspects of the Blue Jays player development program, including the newest department in the organization:


I’m trying to collaborate with the baseball ops leadership group to help in any area that I can.  Hopefully I can do that.  I am spending more time with our player development and high performance staff and that’s an exciting area to be involved with the Blue Jays right now.  We’ve got outstanding leadership in Gil Kim, Angus Mugford, Eric Wedge, and many more.  Our staff worked tirelessly all winter to prepare for spring training and trying to figure out the best way to help players get better.  It’s been exciting to see that unfold this spring.  I’ve learned a lot already in 6 months.

Under former GM Alex Anthopoulos, the primary purpose of the farm system was to provide currency to upgrade the major league roster.  From November 2015 to the end of July the following year, he dealt 18 prospects in order to acquire proven MLB talent like Troy Tulowitzki, David Price, and Josh Donaldson.  In the late fall, he dealt away a passel of prospects including Noah Syndergaard for R.A Dickey, and another to the Marlins for a return which included Jose Reyes and Mark Buehrle.

While Anthopoulos' wheeling and dealing did bring post-season baseball back to Toronto, it also left the major league roster on the old side, and a farm system that had been emptied of much of its depth. Cherington would not come right out and say that such a development would not happen under his watch, but his player development roots are obvious:

Player development's job is to help players get better.  Period.  If we do that successfully then we are impacting player's lives on the field and off.  If we do that successfully we are also helping the Blue Jays by preparing players to be part of a winning Blue Jays Major League team.  Along the way there may be times when trading a minor league player makes sense.  So our job is to help players get better which in turn supports the Blue Jays mission to bring a World Series back to Canada.

And while the Blue Jays system did take a hit, there still is top-level talent in the system, and a decent draft last year helped rebuild it quickly.  Under Anthopoulos and departed Amateur Scouting director Blake Parker, the emphasis was on finding high-risk/high-reward athletes, including players from non-traditional markets, high schoolers with college commitments, and others whose draft stock had tumbled for a variety of reasons.  While not tipping his hand in terms of his drafting philosophy, Cherington did indicate that when it comes time to pick in the June draft, the Blue Jays will always go with the best player:

Our amateur staff, under the leadership of Tony LaCava and Steve Sanders, works tirelessly to identify the best players available in the draft and there is a process to line those players up on the draft board in June.  Ultimately when its our time to pick we’ll take the best player.  If those players come more from a certain demographic in a given year I think that’s a function of how that particular draft unfolded, not a bias toward one demographic or another.


As for the international market, seen as one of Cherington's biggest success (despite the Red Sox getting dinged heavily for signing violations during his tenure) , he's confident that the combined efforts of Assistant GM Andrew Tinnish and Director of Latin American Operations Sandy Rosario will allow the Blue Jays to continue to be major players in that market.  As far as the prospects of a potential International Draft, Cherington isn't losing sleep over it:

It’s really not something we think about on a day to day basis and if there are ever further changes to the International signing rules, I know we have the people to make the right adjustments.

When asked where he thinks where the Blue Jays farm system ranks, Cherington prefers to be concerned about his own system, and not how it might compare to others:


I’ve been really impressed with our players and staff commitment to getting better.  And I’ve seen that happen between instructional league and spring training.  It’s exciting to see the progress.  And we have a lot of talent that is maturing.  Some of those guys have had a chance to make an impression in big league camp.  Some are doing that in minor league camp.  I’m excited to see what they do during the season.  We’re so focused on what we need to do every day to get better I haven’t spent any time thinking about other systems.

Mark Shapiro has wasted little time in assembling what is shaping up to be a top-flight organization.  There were not wholesale changes at first, but slowly he's been placing strong personnel in key positions throughout the organization, and has created the high performance division to help give the Blue Jays a potential competitive advantage when it comes to the development of their players.  The addition of Cherington solidifies the idea that Shapiro is endeavouring to build a system that is a model of player development.  He has brought in the likes of Cherington, Sanders,  Director of Operations Mike Murov, and Director of Player Development Gil Kim to add to a solid stable of holdovers from the Anthopoulos era like LaCava, Tinnish, Dana Brown, and Perry Minasian.  Often hampered by small-market constraints in Cleveland, Shapiro now has the resources to build an organization that could be poised to be competitive on an annual basis.  For someone who has been following the Blue Jays minor league system closely for five years, and has been a fan of the team since that snowy April day 40 years ago, this is a very welcome and exciting development. With all due respect to the management team that served under former GM Pat Gillick, there has never been such a wealth of front office talent in this organization.  And when you speak with members of that front office, you get a sense that this is a very cohesive, on-the-same-page group.  Add in the high performance division, and couple that with the anticipated changes to the minor league training complex, and the high degree of collaboration between the various facets of the player development side (minor league ops, scouting, and high performance) and the future for the Blue Jays looks very bright indeed.
Posted by Clutchlings at 8:01 AM