Scouring the Bargain Bins at the Rule 5 Draft 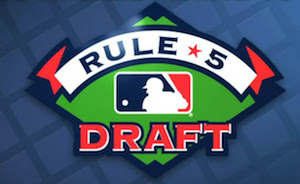 Baseball's Rule 5 draft used to have great significance, and added fuel to the Hot Stove embers.
Teams that tried to sneak an eligible player through the draft would get creative in where and how they hid them, while teams like the Blue Jays would get equally creative in the lengths they would go to uncover them.
The draft has had many incarnations over the years, but the main purpose of it remains to give long-serving minor leaguers an opportunity to reach the bigs with another organization, and to keep teams from stockpiling talent.
To draft an eligible player, the team acquiring him must pay $50 000.  The player must be kept on the team's 25 man roster for the entire season.  If the drafting team changes their mind on said player, he must be offered back to his original club for $25 000.
The Rule 5 draft used to remind me of the bargain bins at Coles, when the bookstore chain once was in every mall of every size in our fair country (that country being Canada, of course).  Everything in the bins was under $5, and once in a while you would score a huge bargain.  Author/musician Dave Bidini's Baseballissimo was an informative and entertaining account of a summer Bidini spent following an Italian semi-pro team.  John Grisham is widely known for his legal thrillers, but he stepped outside of the courtroom to pen Playing for Pizza, a fictional account of a back up quarterback who somehow got into an NFL game, and put on such a poor performance that he was exiled to the Italian Pro (and we use that term loosely) Football League.  I have long wanted to travel to Italy to take a cycling holiday and visit the grave of a Great Uncle who was killed in WWII.  After reading Grisham's book, I now want to go for the food too. His descriptions of the post game meals were reason enough to read the book.
But the reason those books wound up in the bin, with all due respect to the authors, is that no one wanted them, or maybe they were beyond their shelf life.  Same with players in the Rule 5 draft.  Their current organizations either didn't see enough progress or projection to place them on the 40 man roster.

The rule 5 draft is open to players who:

-are not on their major league organization's 40-man roster (as of November 20th), and:

– were 18 or younger on the June 5 preceding their signing and this is the fifth Rule 5 draft upcoming; or

– were 19 or older on the June 5 preceding their signing and this is the fourth Rule 5 draft upcoming.

Up until 2007, teams were only allowed four and three years for the above players.  With the extra year of eligibility, clubs now have more time to make a more informed decision about their players, and fewer impact players are exposed to the draft as a result.
The increased number of pitchers, particularly relievers, a team uses each year has gone steadily up as well.  We've used an admittedly arbitrary benchmark of 20 appearances for a pitcher over the course of almost 30 seasons.   In 1985, the Blue Jays had 10 pitchers who pitched in at least that many games.  In 1995, it was 10 as well, 12 by 2005, and 14 last year.  Injuries and how the team used its bullpen certainly figured into those numbers, but the trend clearly shows that the club has carried more pitchers (usually 12) now compared to an average of 10 thirty years ago.  With the decreased number of position players on the roster, teams can no longer afford to draft a rule 5 player and keep him on the bench for most of the season, like the Blue Jays did with youngsters Manny Lee and Lou Thornton in 1985.
A pitcher can be stashed away (somewhat) in a bullpen, and only used in specific situations, which is likely why 69 of the 93 players chosen since 2008 have been pitchers.  21 players were selected in the draft in the first year after the rule change, and has steadily dwindled to a low of 9 last year.  Over 50% of the players selected during that time were returned to their original clubs.
The Blue Jays for the past several years have taken a very conservative approach with their minor league players, particularly high school pitchers.  They have taken a more aggressive route with some of the organization's top prospects, but draftees still typically spend between 1 and 2 years in short season ball (more for international prospects, many of whom are signed at 16 or 17), and progress up the ladder one rung at a time, meaning that it often takes 4 or 5 years just to move beyond A ball.  As a result, of the 23 (by our count - we may be off by one or two either way) Toronto minor leaguers who are newly eligible for this year's draft, only two (relievers Blake McFarland and the injured John Stilson), have spent any significant time above High A.  We should add, of course, that players who were not put on the 40 man roster in previous years, and still have not been placed on it this year are eligible as well.

So, who is likely to be taken from the Blue Jays list of eligible players?  Well, most who haven't played above A are not, and neither is Ricky Romero, who is owed $7.5 million this year and a $13.1 million team option with a $600K buyout for 2016 (we think we know which way that's headed), after knee surgery in June ended a season in which he had walked 42 batters in 38 AAA innings.  Another who won't be taken is righthander Ryan Tepera, who was added to the 40-man at the November 20th deadline.  A starter for his first five years in the system, Tepera was converted to relief this year, and quietly had a good season in Buffalo, striking out 67 in 64 IP.  He likely would've been scooped up if he hadn't been added.
Baseball America's JJ Cooper took a look across the minors to see who might be most likely to be bargain bin scoops, and he identifies three Blue Jays who teams may take a flyer on:  Stilson, and relievers Tyler Ybarra and Gregory Infante.
Stilson is coming off his second shoulder surgery since 2011, but hit 97 for Buffalo this year, and sat between 93-95.  If not for his shoulder woes, he might have taken up residence in the Blue Jays bullpen.  Rule 5 players have to spend 90 days on an MLB roster, but he can spend time on the disabled list.  The risk, of course, is that there are no guarantees for a player in Stilson's position, and if teams likely won't want to have to pay for subsequent operations if the most recent was unsuccessful.  Toronto is likely banking on that, and it's highly unlikely that Stilson will be taken.
Infante hit 100 on the radar gun for New Hampshire this year, but he tends to have little movement on his fastball, and often catches too much of the strike zone.  Still, he pitched well in AA and AAA, and when BA's prospect report lands in our inbox every morning of late, he's often had another good outing in Venezuela.  Infante has had a go of major league life already, having made his debut with the White Sox in 2010.  He might be worth a gamble.
Ybarra can light up the radar gun, too.  The lefthander sits between 94 and 97, and after overmatching High A hitters last year, Ybarra was roughed up a bit at AA, struggling with command (30 BB in 53 innings), and he gave up 8 home runs.  All 29 other MLB teams passed on him last year, and it's likely that they will again this year, too.
Cooper didn't make mention of lefty John Anderson, who was exposed to the 2013 draft, but wasn't chosen.  Anderson struck out 72 in 68 innings with New Hampshire this year.  The huge red flag with Anderson is the pair of Tommy John surgeries he had within 15 months of each other earlier in his career. Still, he's averaged more than a K per inning since resuming his career in 2013.  With his injury history, being selected this year is still unlikely.
The Blue Jays, for their part, have largely eschewed the Rule 5 draft during the Alex Anthopolous era.  The only player they have selected since 2010 was lefthanded reliever Brian Moran last year from Seattle, who they promptly traded to the Angels for International bonus pool money, in effect getting something for relatively nothing.
A player who is intriguing and will be available in the draft this year is Astros prospect Delino DeShields.  The offspring of the former MLBer by the same name.  DeShields has richly deserved a reputation as a problem child, having been benched multiple times for giving less than a full effort on the field.  The 8th overall pick in the 2008 has the best tools in this draft (he has Milb's only 10-100 season ever, hitting 12HRs and stealing 101 bases in 2012), but after hitting .236/.346/.360 in AA this year, he may still be a few years away.  DeShields plays an adequate centre field, and can also play second.  He's a huge gamble, but given the Blue Jays troubles at the latter position, and their penchant for rolling the dice with premium athletes, we could see them taking DeShields and giving him spring training to see if he could make the leap.
There are some interesting power arms in this year's draft, but the Blue Jays likely are content with the supply of such pitchers they already have.  The draft takes place on December 11th.

We wrote about the Rule 5 Draft and how the Blue Jays used it to acquire one of the best players in team history, and you can read about it here.
You can read JJ Cooper's BA article here.