Blue Jays Prospects: Who Could Contribute This Year?


A Twitter follower asked us if we could come up with a list of prospects not named Daniel Norris or Dalton Pompey who we thought might make a contribution with the Blue Jays in 2015.
That's a tough task, given that the club's top two hopefuls (Aaron Sanchez and Marcus Stroman) not only had lengthy stays on the 25 man roster last year, they also made significant contributions to the club, and Norris and Pompey are likely to have a similar impact at some point next year.  Of all the prospects in the Blue Jays system, there is only one who might have any kind of similar impact in 2015:

Miguel Castro, RHP
The one player who could make an Aaron Sanchez-like impact is this tall, skinny Dominican hurler.
Castro regularly hits 98 on the gun and touches 100 with his fastball. Northwest League hitters were over matched against him, so he was promoted to Lansing and then Dunedin before season's end.
The knock against Castro, as has been well documented, is that his secondary pitches grade as average at best. He will likely start at Dunedin and be moved to New Hampshire if he continues to have the kind of success he has had to date.  If his offspeed repertoire has not advanced enough, AA hitters will likely make him pay for it - if they can get around on his fastball.
Alex Anthopolous himself has suggested that we may see Castro in the Toronto bullpen this summer.  If his first few starts at AA are rough ones, we don't think the club would hesitate to make the switch, and have him follow a conversion similar to that of Sanchez - a couple of Milb relief appearances, and a promotion to the bigs by mid-summer.
As much as we would like the club to give Castro every chance to prove he can be a starter this year, and given the status of the current Toronto pen, this plan makes a lot of sense.
MLB.com gives us a glimpse of the 19 year old:

So, the following players are ones who we think have an outside shot at making an appearance at some point in the major leagues this year, but their impact will likely be less dramatic.

Ryan Tepera, RHP
A middling starter for much of his career since being chosen by Toronto in the 19th round of the 2009 draft, Tepera's fortunes began to change when the organization moved him to a bullpen role with New Hampshire in 2013.
Left off the 40 man roster and eligible for the Rule 5 draft last fall, Marc Hulett named Tepera as his top selection.  Luckily, all 30 MLB teams passed on him, and Tepera pitched in relief for Buffalo last season.  His numbers were not overwhelming, but he struck out slightly more than a batter per inning, and had a decent BB/K ratio.
Tepera has hit 96 with his fastball, and has a sinker with good downward action.  The Blue Jays thought enough of him that they put him on the 40 man just before the November deadline this year, in order to keep him out of the Rule 5 draft.  We can't see him breaking camp with the big team in April, but we can see him with the club at some point, especially if there are any bullpen meltdowns.
You won't get a strike out the side type of power arm with Tepera, but what you will get is a pitcher who throws strikes, and pounds the lower part of the strike zone.  His likely role with the club would be in long relief, doing a Chad Jenkins-like Toronto-Buffalo QEW Shuffle.


Chad Jenkins, RHP
We can't really think of the 2009 1st rounder as a prospect anymore, but the truth is that he pitched well for the club in a variety of roles last year, including emergency starter and first guy out of the pen.
Jenkins is not a flamethrower, barely topping 91 with his fastball.  What he does is keep the ball down, essential for any Rogers Centre pitcher: 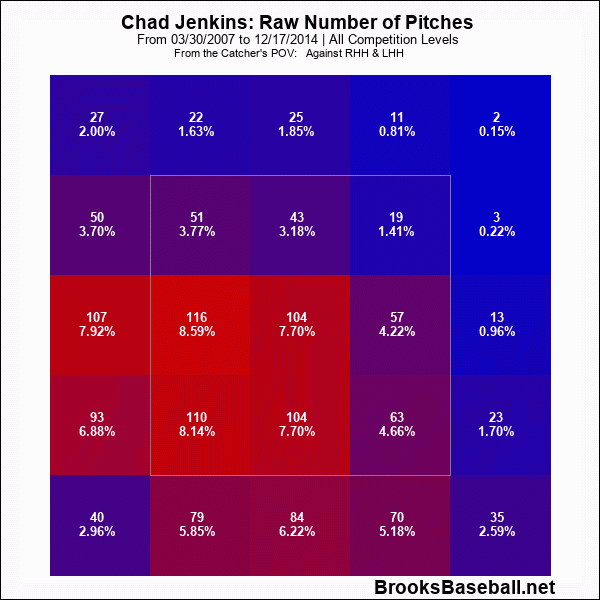 Jenkins has one year of options remaining, so it's likely that he will continue in his role as a fill-in, cross the Peace Bridge multiple times guy.  He can make a contribution, but it will most likely be in an emergency role.

AJ Jimenez, C
Once a fringe Top 10 prospect, Jimenez has fallen off the radar due to an inability to stay healthy over the past two years, and growing concerns about his bat.
Having watched a fair bit of him, he has the makings of a premium backstop.  Lithe and athletic, his moves behind the plate are cat-like.  He is adept at blocking balls in the dirt, and is a good handler of pitchers - he's caught a fair amount of Stroman, Sanchez, and a bit of Norris.
At the plate, Jimenez has a line drive stroke, but doesn't project to hit for much power.  He doesn't walk or strikeout out a whole lot:


The signing of Russell Martin, of course, was not good news for Jimenez.  With Josh Thole firmly ensconced as RA Dickey's catcher, there would appear to be no room for Jimenez, who is heading into his final year of options.  If Martin proves successful at catching Dickey's knuckler, or if he gets injured, a spot might open up for Jimenez.  With Max Pentecost and Danny Jansen on their way up the system, Jimenez's time with the organization might be limited, anyway.  If he were to make a contribution to the club this year, it would be in a reserve role.

Andy Burns, 3B
Burns was the surprise of the organization last year, playing at A+ and AA before finishing off his season in fine style in the Arizona Fall League.
A slow start cost him a chance at advancement this year.  Burns hit .200/.261/.294 in April, and .223/.317/.359 in May before finally heating up, and finishing the year at .255/.315/.430.
He played mostly 3rd this year at AA, but Burns has the athleticism to play a variety of positions both infield and outfield.  The Blue Jays played him at five positions in Arizona, as it looks like they are priming him to be a super utility player.  With things more or less open in the competition for the 2nd base job with Toronto at spring training, it will be interesting to see where the club decides to play Burns, who will likely play at Buffalo.
If injuries and/or inconsistency open up a spot for a player who can play a variety of positions, Burns could get an audition.

Jon Berti, 2B, Devon Travis 2B
The acquisition of Travis  pushes Berti down the depth chart.  Berti projects to have plus speed, but the question is if he will get on base enough to take advantage of it.  Berti drew good reviews for his play against top calibre competition in the Arizona Fall League.
Travis, similar to Kevin Pillar, has hit just about everywhere he has played, but like Pillar has more than his fair share of detractors.  He will likely start the season at Buffalo, with Berti returning to New Hampshire.  The need for some offence at the position on the big club is so huge that we can easily see one of the pair get a trial in the majors if they get off to a blazing start.
With his speed, Berti profiles more as a leadoff hitter, although he posted his lowest walk rate in four years of pro ball last year at AA.  Travis is projected to be more of a bat will play kind of guy, likely in the bottom third of the order.

And that's about it.  Farm systems tend to be cyclical in nature, so this year may be a bit of a down year in terms of producing players who can make a significant impact at the major league level.  As we have written before, with over half of the system's depth a Low A or lower, and with 3 of its top 20 prospects traded in the Josh Donaldson deal, it will take at least another year to produce any more top level talent.

Posted by Clutchlings at 8:42 AM